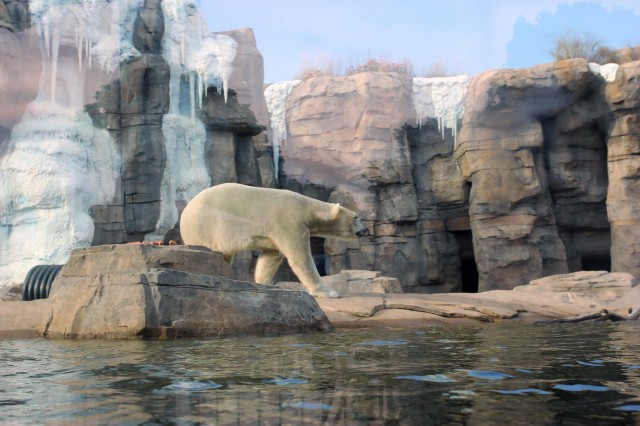 We catch a smile from Nikita, the polar bear who calls the Kansas City Zoo his home

There’s a common myth that polar bears inhabit both the Arctic and Antarctic, helped along by photos of the great white bears seen next to penguins. But in fact, polar bears are found only in the Arctic; penguins, the Antarctic.

Even the names of these places imply the great Arctic connection to polar bears: arctic comes from the Greek word for bear, while antarctic means the opposite – without bear.

And while the hunting of polar bears that posed a great threat to the Arctic population in the 1960s and 70s has been cowed, due to the International Agreement on the Conservation of Polar Bears in 1973, an antarctic Arctic is still an all-too-real threat.

Today, polar bears’ greatest threat is the loss of their sea ice habitat due to climate change. Sea ice means everything to these bears: it is home to their hunting, breeding, and sometimes, their dens.

It’s very exciting that our hometown Kansas City Zoo is host to two polar bears – Nikita and Berlin – as they work together with zoos across the country to educate and communicate the need to reduce greenhouse gases, reuse resources, and reverse global climate change.

And, as Polar Bears International addresses in detail on their own website, zoos play an important part in saving polar bears and their sea ice habitat. By rescuing at-risk wild bears, and by connecting the bears to us, zoos are providing ambassadors for the polar bear cause. Not only that, but our knowledge about wildlife medicine and diseases will continue to develop because of the work accomplished at quality zoos, like our Kansas City Zoo.

For their part, Polar Bears International is the world’s leading polar bear conservation group — dedicated to saving polar bears by saving their sea ice habitat through research, education and action.

An Award for Exceptional Sustainability

So we are very honored to be recognized by PBI Founders, Robert and Carolyn Buchanan, for their Founders Award for Exceptional Sustainability Actions. Hosted by the Kansas City Zoo at – where else? – Polar Bear Passage, we were in great company, joining the City of Kansas City, Missouri, Mid-America Regional Council, Bridging the Gap, Metropolitan Energy Center, The Green Impact Zone, KCP&L, Greenability Magazine, and Jackson County, Missouri in being recognized by Polar Bears International. A big congratulations to our fellow recipients, and a big thank you to Polar Bears International – not only for this award, but for all of the work that they do.

This honor is possible because of the hard work of all Brightergy team members, and because of our clients, who by making the switch to solar energy make a difference in greenhouse gas emissions, and in saving the habitats of animals like the polar bear. Thank you!

After the awards ceremony, Nikita snacked on a well-deserved treat of carrots.

Want to learn more about what else you can do to help save the polar bears and their habitat? Visit Polar Bears International to read PBI scientists’ List of Actions.