What Happens to Your Net-Metered Solar-Energy System in a Power Outage? 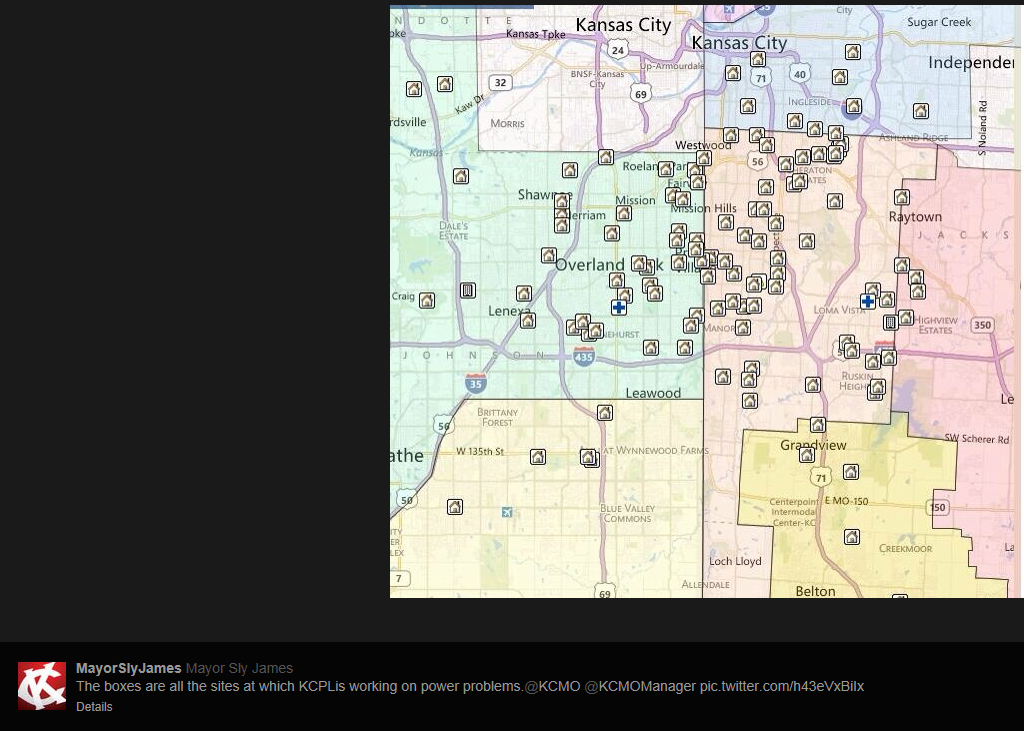 Missouri and the Midwest are in the midst of their second snowstorm – Snowstorm “Rocky” – in a week and this time around, the snow is heavy and wet, weighing down trees and power lines and leading to extensive power outages throughout the Kansas City metro area and Mid-Missouri (as you can see in the tweet pictured above from Kansas City, Mo. Mayor Sly James). And if you’ve installed a solar-power system, you might be wondering, what happens to your net-metered solar-energy system in a power outage?

Last summer – while it seems eons away – was a hot one, both in Missouri and worldwide. Extreme heat often means blackouts and India suffered an extensive one, bringing about a discussion about the development of their electrical grid and the use of solar energy as a clean and efficient solution in developing countries.

Using Solar-Energy As a Solution to Developing Countries’ Grid Problems

In a post of our own on the subject (Solar Batteries and the Electrical Grid), we talked about solar energy’s usefulness in these situations for countries like India:

Indians have taken to keeping diesel-powered generators handy for incidents of grid-power-down, but even with government subsidies for diesel fuel, the generators are expensive to run, not to mention dirty. And while many businesses and individuals do have to resort to the generators for back-up, for many Indians, they’re simply not an affordable option – and they’re not simply back-up, either.

The expansion of grid-access is a slow-moving beast in India and many villages don’t have access to grid-electricity – nor the funds for the aforementioned generators. This leaves many citizens burning driftwood or kerosene for light – an often dangerous, low-quality, and still expensive method of energy source.

There are positives to the story though: a growing renewable energy market and aggressive clean energy goals in India, as the government moves to light up the entire country, and a growing number of businesses who are making solar energy and lighting affordable and accessible for poor and off-grid villages, households, and businesses. Businesses like the Mera Gao Project work by providing micro-grid solar-energy systems (consisting of two solar panels, two batteries, and four distribution lines) to villages at a cheaper rate than kerosene.

These particular projects are built to function off-grid – hence, the micro grids, batteries, and generators – and bring further light to the disparity between India’s situation and our own electrical grid.

But perhaps we should back up.

Solar Batteries and Microgrids in the U.S.

A micro grid is a smaller, individual-sized version of our own central, utility-controlled grids – a system of energy production and distribution that was cooked up by the same man who invented our modern light bulb – Mr. Thomas Edison.

For readers who visited Kansas City’s Nelson-Atkins Museum this past summer, the Sun Pavilion installation offered a good look at how an electrical micro grid functions – and we also spent a bit of time on this blog working through the history and details of electricity, current, and the grid.

One question clients and potential customers often ask of us is, will I need batteries for my solar system? Summer blackouts and super storms withstanding, not only do the majority of U.S. citizens have access to the electrical grid, our grid system here in the US has a history of reliability. Therefore, for most solar systems, it doesn’t make much sense to add a battery; the cost just isn’t justified. And in fact, in order to take advantage of utility solar  rebates, your photovoltaic solar system must be grid-tied.

Your Net-Metered Solar-Energy System Must be Grid-Tied

Any clean energy that you produce in excess of your immediate needs is entered into the grid, and then used to offset an equal amount of power supplied by the utility. You are then billed for your “net” energy use.

Of course there are off-grid exceptions, and if you prefer to have a back-up, a solar battery back-up may be simpler (and cleaner) than relying on diesel-powered back-up generators. Since you typically won’t be running your entire building off of a solar battery, we use a critical load panel that allows you to run the things you need during an outage. And in the case of a grid-outage, your solar turns over at the flip of a switch.

Still have questions about net-metering and your grid-tied solar-energy system in a power outage? Let us know in the comments below.