One of the best illustrated aspects of the Sun Pavilion at the Nelson Art Museum is the input and output of electricity. Sunlight goes into the solar panels, and energy goes out in the form of lighting and air conditioning. But clearly, these two forms of energy are very different. So how is it that the solar system works to convert sun power into usable energy and electricity? 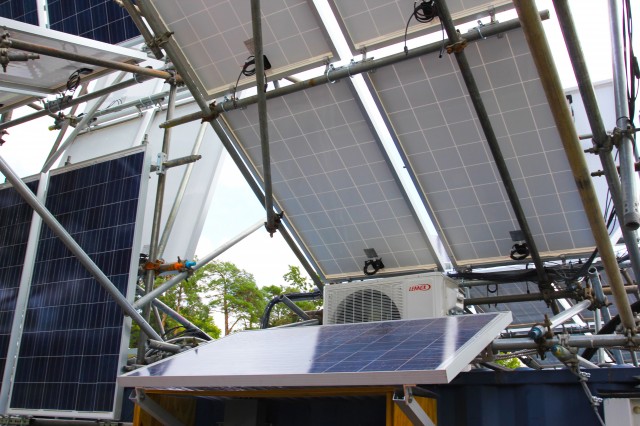 The Lennox air conditioner juxtaposed with one of the solar panels that powers it, at the Sun Pavilion (housed in the Sculpture Park on the lawn of Kansas City’s Nelson-Atkins Museum.)[/caption]

We talked a little bit about the origin and development of electricity in our first post in this Nelson Sun Pavilion series. You might remember, the modern age of electricity really began with the discovery of electrons in 1897. Not that long ago, in energy terms. And in our last post, we broke down how voltage and current relate to each other, and how they change throughout the solar system. Current – or amps – is determined by the number of electrons flowing through the circuit. Voltage is the pressure pushing the electrons along.

PBS produced a great film about electricity – Edison’s Miracle of Light – and on their website, they share a little insight into the origins of DC and AC, and “the battle of the currents.” In 1887 – Edison’s day – DC, or direct current, ruled the waves. Across the US there were 121 Edison power stations that delivered electricity via DC current to its customers. But DC’s heroic flaw was that the power plants could only send electricity for about a mile before it began to lose power. In 1886, George Westinghouse formed Westinghouse Electric,to compete with Edison’s DC system. Westinghouse had developed an electrical transformer that could take AC (alternating current) from high voltage to low, enabling it to both travel further distances and arrive ready for use.

Edison fought this development with a PR battle, claiming AC endangered human life – complete with a campaign publicizing the State of New York’s use of AC power as its official means of execution. But, given the great power of public display as exemplified in the World’s Fairs, in 1893 Westinghouse won the “battle of the currents” when his company safely lit the World’s Columbian Exposition in Chicago (and soon after, Westinghouse won the rights to develop Niagara Falls).

So how does all of this relate to solar power? When the sun’s light is absorbed by solar panels, DC electricity is created. This DC electricity is then manipulated throughout the solar system, where it is converted to AC electricity. Since Westinghouse proved the safety of AC, this is what our grid electrical system runs on. So once the current is converted to AC, it can be safely and effectively used to power devices like the Sun Pavilion’s lights and ac (air conditioning).  Sun > Panels > DC > Charge Controller > Inverter > AC > Power. 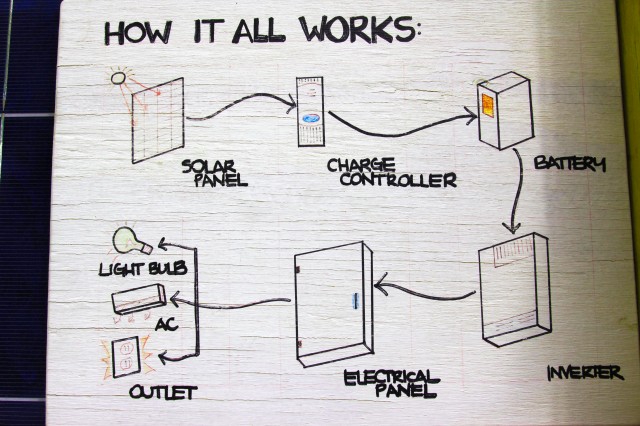 How It All Works: a placard at the Nelson demonstrates How the Sun Pavilion’s solar panels work to convert solar energy to DC electricity, and then to the AC electricity we can use.[/caption]

What we love about the Sun Pavilion is the visual reference it gives to this often unknown, unseen, or un-thought-of component of solar panels – and of electricity. While the inside process of solar systems can be quite complicated, it can still visually appear quite simple, and structurally appealing.