Solar Energy at the Nelson-Atkins Museum 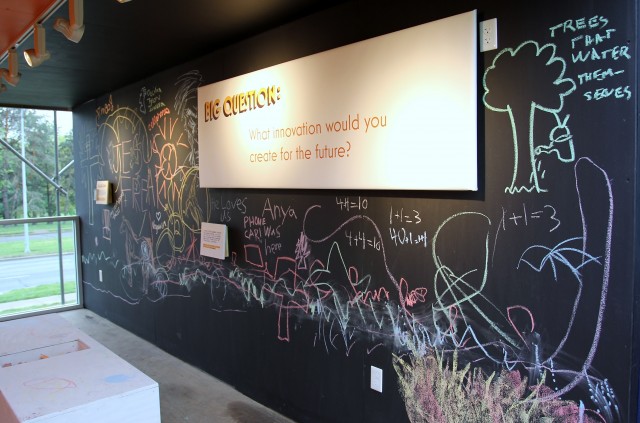 One of the questions the Sun Pavilion poses to its visitors is, “What innovation would you create for the future?”[/caption]

Rarely do I think about how I get my electricity – or perhaps receive it is a better term. I simply know that I do – and quite reliably. Except, of course, in the case of last week when I came home to a power failure on my block, normally a quietly illuminated street. In fact, as I walked home from an evening of shopping with a friend, we were so engrossed in conversation that we hardly noticed the growing dimness of the streetlights.

And then, as the growing darkness began to grab our attention, we reached the top of the hill, gazed down at a block of blackness, and it hit us all at once:

No power. No electricity. No lights. No air conditioning.

Now that is some fresh hell when you’re in an onset of a relentless heat wave, as we are here in the Midwest. And the fact of air conditioning, rolling blackouts, and summer energy bills does actually have us all pretty conscientious of how we use our electricity. I turn out lights when I leave the room. I keep the drapes drawn, the blinds closed, and the thermostat at a balmy 76 – 78.

Of course here at Brightergy I think a lot about energy. It’s a fact not only of life but of business. As a business, we think about our own energy use, and put conservation policies in place – both for environmental and for financial reasons.  And as a business, we help other businesses do the same by installing solar panels, reducing energy costs. A few benefits of solar energy are that solar panels work best at peak times when the sun is hot, and when you’re producing and storing your own energy, the costs are significantly less. And then there’s the fact that the solar panels on your roof form something of a shield, absorbing and deflecting heat, enabling your building to cool itself easier.

But rarely do I, in my daily life, think about how electricity works. I flip on a light switch, and there it is: light. Sixth grade science was, after all, a long time ago. And actually, it’s likely been awhile since we all got together to marvel at the wonder that is electricity.

Electricity at the World’s Fairs

Scientists and philosophers began to examine the existence of electricity as far back as ancient Greece, but it wasn’t until 1897 that scientists discovered electrons, and the modern age of electricity as we know it began. In the case of my dimmed street lights, the first outdoor electric lighting debuted at the Paris World’s Fair in 1878 – just a decade after Thomas Edison invented an incandescent light bulb that could be used for 40 hours without burning out.

The sort of gatherings the World’s Fairs and Expos produce have been going on for ages, but the modern World’s Fairs really began to gain steam during the middle of the nineteenth century, as the industrial revolution unfolded. Fair participants found an audience primed to marvel at their creations, wonder at possibilities, and learn how they themselves were affected (I for one, am affected frequently and positively by the ice cream cone, an invention of the 1904 St. Louis World’s Fair).

Electricity from Solar Energy at the Nelson-Atkins

So when Kansas City’s Nelson-Atkins Museum of Art began to think about their exhibition, Inventing the Modern World: Decorative Arts at the World’s Fairs 1851-1939, curator Catherine Futter wanted to capture the spirit of invention housed in the grand pavilion structures. And thus, the Sun Pavilion concept was born.

Brightergy designer Alex Norman worked with local architecture firm Generator Studio to build a structure featuring 150 solar panels – 35 of which are plugged in and working – that also demonstrates the how and why of solar energy and how it relates to us, energy-consumers that we are.

The end result has been a spectacular creation, a puzzlement to street side observers, and a fascinating display of a few of the functional elements of the Sun Pavilion’s particular solar system, which we hope to break down and illustrate here, over a series of blogs to run in the next few weeks until the exhibition ends on August 19.

So stay tuned this summer as we prepare show an illustrated look at:

In true World’s Fair style, prime yourselves to marvel – because when you break it down, electricity really is pretty dazzling, and the Sun Pavilion was built ready to show.