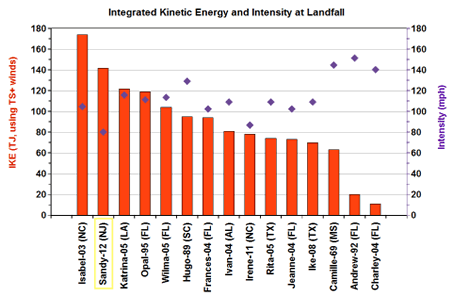 image via the Washington Post[/caption]

All around us are examples of the sheer power of nature – not least, in the weather. From the lighting and thunderstorms and the tornadoes that rattle us here in the Midwest, to the superstorm Sandy that’s wreaked havoc all along the Northeast, there can be no underestimating the forces the Earth is capable of.

According to the Washington Post, “there is a metric that quantifies the energy of a storm based on how far out tropical-storm force winds extend from the center, known as Integrated Kinetic Energy or IKE.” Hurricane Sandy’s IKE rated second among all hurricanes at landfall in modern records; 2003’s Hurricane Isabel ranks first.

In their surface winds alone, many hurricanes will at any given moment contain more energy than an atomic bomb. Keeping in mind that 1 Terajoule equals 1 trillion Joules, which equals 277,778 kilowatt hours, Sandy’s IKE was more than 140 Terajoules – meaning the storm generated over twice the energy of the atomic bomb at Hiroshima.

That’s a lot of energy. An amount, in fact, that has been devastating to our own energy infrastructure.

Sandy’s Effect on the Electrical Grid

An article in the Huffington Post reports that, “when Hurricane Sandy struck the East Coast, it flooded electrical substations and knocked down trees, shutting off power for 8.2 million customers. Recovery has continued to stretch out. Experts list a number of reasons – and solutions – but they all make the point that our power grid and infrastructure could be more resilient.

Others are calling for more undergrounding of power lines – a cry that increased in popularity after this summer’s derecho near Washington DC shut down power for more than 1 million residents. And while the source of many failed power lines is heavy winds and fallen trees, underground lines are susceptible to flooding, making recovery time take longer – as we’ve seen in New York.

Peter Fox Brenner, principal of energy consultancy The Brattle Group, says that the ultimate solution would be to update both transmission and distribution networks, making the grid smarter and opening it up for more distributed power.

“No one thinks about the power grid as long as the lights turn on when you flip the switch, and that happens well over 99 percent of the time,” says Fox-Brenner. “But when it goes down, people start asking whether there’s any better way to do it.”

Bloomberg Businessweek reports that while homes with solar aren’t producing power where the grid is down, solar arrays – designed to withstand winds up to 100 miles per hour (Sandy hit 90 mph at its peak) – remain intact. First of all, a distributed power system would mean less dependency on the grid. But renewable energy writer Elisa Wood sees another reason for the strength of wind and solar, in the simplicity in their design, inspired by nature:

As we’ve seen, there can be no underestimating the power of nature – nor can we expect to control it. There will be storms; there will be damage. But what we can control is our ability to prepare, to recover and to sustain strength. And just as nature has the power to destruct, it also contains the power to rebuild.  Are we stronger if our infrastructure more closely reflects and aligns with the natural world?

What do you think?