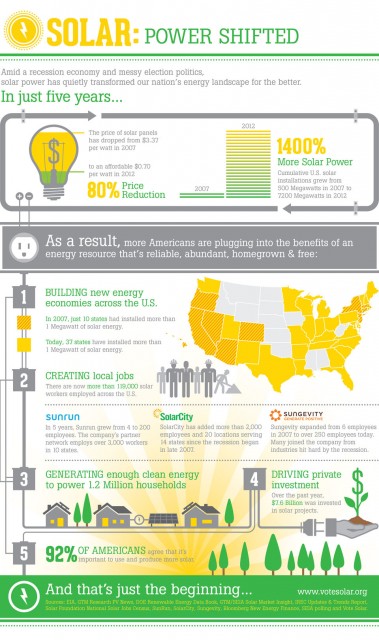 Amid a recession economy and messy election politics, solar power has quietly transformed our nation’s energy landscape for the better.[/caption]

Last month, Brightergy celebrated it’s second birthday and the rapid growth we’ve experienced since our inception. As members of one of the United States’ fastest growing industries, change is expected – welcome, even. And as we near year’s end, we’re preparing for the coming new year by not only looking forward, but also by reflecting back on all we have accomplished this far, and all that we strive to improve upon, both as a company and an industry.

One of the more remarkable and positive signs of the solar industry’s promise has been the rapid decline in installation prices, paired with rapid market growth. According to a report released by the Department of Energy’s Lawrence Berkeley National Laboratory, the average cost of installing solar in the U.S. continued a steady decrease in 2011 and through the first half of 2012.

As Adam Brown, Executive Director of the Vote Solar Initiative said, “This report shows just how far solar power has come in the U.S., and how much more we can do. Faced with a recession economy, messy election politics and an entrenched electricity marketplace, solar is quietly defying the odds and reinventing our national energy landscape. It’s really remarkable.”

The annual report, “Tracking the Sun,” on solar photovoltaic costs in the United States examined more than 150,000 PV systems installed between 1998 and 2011, and included preliminary data from the Q1 and Q2 of 2012. Key findings highlighted the industry’s predominant trends of cost decline, record growth, and job growth in the face of an economic recession.

As President and CEO of the Solar Energy Industry Association (SEIA) Rhone Resch put it, “declining costs have driven record growth over the last four years and we expect the solar market to double in 2012 and double again in 2013. This growth proves that smart federal and state energy policies diversify our energy portfolio and grow our economy. With 5,600 companies employing 119,000 Americans, the U.S. solar industry has become an economic engine for America.”

As our company has grown from 10 employees to 55; 1 small office to 3 locations in 2 different states; more than 400 projects completed in Missouri, we feel we’re living, breathing proof of the growth and promise of solar energy.

In addition to Tracking the Sun’s findings on the falling prices of solar installations, a number of recent reports have illustrated the industry trends mentioned earlier, including the dynamic infographic pictured at the top of this post, distributed by the Vote Solar Initiative.

Bipartisan Support: A 2012 Hart Research National Solar Survey found that 92% of Americans agree that it is important for the U.S. to use and develop more solar energy.